At the extreme of FPGA server density, the TeraBox 1401B/1402B and 1411B/1412B give the highest level of compute and network capability in a 1U chassis. The TeraBox 1401B/1402B servers provides twice the density of the typical 4U server and the power of  4 of our largest Achronix Speedster7t, Intel Stratix 10 or Xilinx UltraScale+ FPGAs. The TeraBox 1411B/1412B support two FPGA cards along with 4 removeable storage drives. These innovative products support PCIe Gen4 and feature an AMD EPYC or Intel Xeon processor in a standard rack depth chassis.

Carlos Tejeda Explains the 1401B and 1402B servers with a hands-on look.

Both these FPGA servers give you four double-width cards with front panel access and in a 1U chassis. Previously that kind of density had required a very deep chassis, but these TeraBox servers fit into a standard depth rack. As I mentioned these servers are all about density and front panel access to ports like the QSFPs.

Let’s remove the lid and look at the motherboard. You can see here we have four cards loaded.

Both AMD and Intel variants support Gen4 by 16 which is supported on a number of FPGA cards from BittWare, and gives you double the bandwidth to the host as compared to Gen3. You can see with single CPU motherboards we’re able to keep the depth of the chassis to 28 inches but still provide server grade processors and lots of host DDR4 channels.

For card support we’re targeting a wide range of our FPGA cards including our newest Gen4 capable designs.

On the 1401B you also get a low-profile slot on the back of the server for additional networking. Over here is a power supply. Both variants have dual 1300-watt redundant power supplies. One of the key advantages of these TeraBox servers, beyond the high performance, is the convenience of getting a pre-configured server. We handle all the testing, integration and validation of these servers and the cards. We also provide a three-year warranty on the server and the cards.

All that in a standard depth 1U chassis.

To learn more or get a quote visit BittWare.com.

up to 4 FPGAs in a standard-depth 1U server

The TeraBox 1401B/1402B support up to four dual-slot BittWare PCIe FPGA cards, and the TeraBox 1411B/1412B support two. Choose from a variety of cards based on the Speedster 7t, Stratix 10, or UltraScale+ FPGAs. System specs will vary greatly, depending on the FPGA card you select. For example, with four BittWare UltraScale+ PCIe cards, which support up to 512 Gbytes of DDR4 per card, the chassis can support as much as 2 Terabytes of DDR4 on the FPGA cards in 16 banks. With four Agilex cards using breakout cables, each chassis supports 48x 100GbE.

The TeraBox 1400B family servers are exclusive to BittWare and are the ideal platform to unleash the energy-efficient acceleration of BittWare’s FPGA cards. This FPGA-optimized 1U server delivers unrivaled performance density and value for a range of compute-intensive applications, including machine learning.

The server is assembled in the USA, is TAA compliant, and offers a 3-year warranty.

Choosing a TeraBox FPGA server means knowing you are getting a pre-configured and tested solution. This includes setup and installation of your FPGA cards and associated hardware, your choice of operating system, and development tools. Your TeraBox arrives ready for use—giving your team more time for development and deployment. 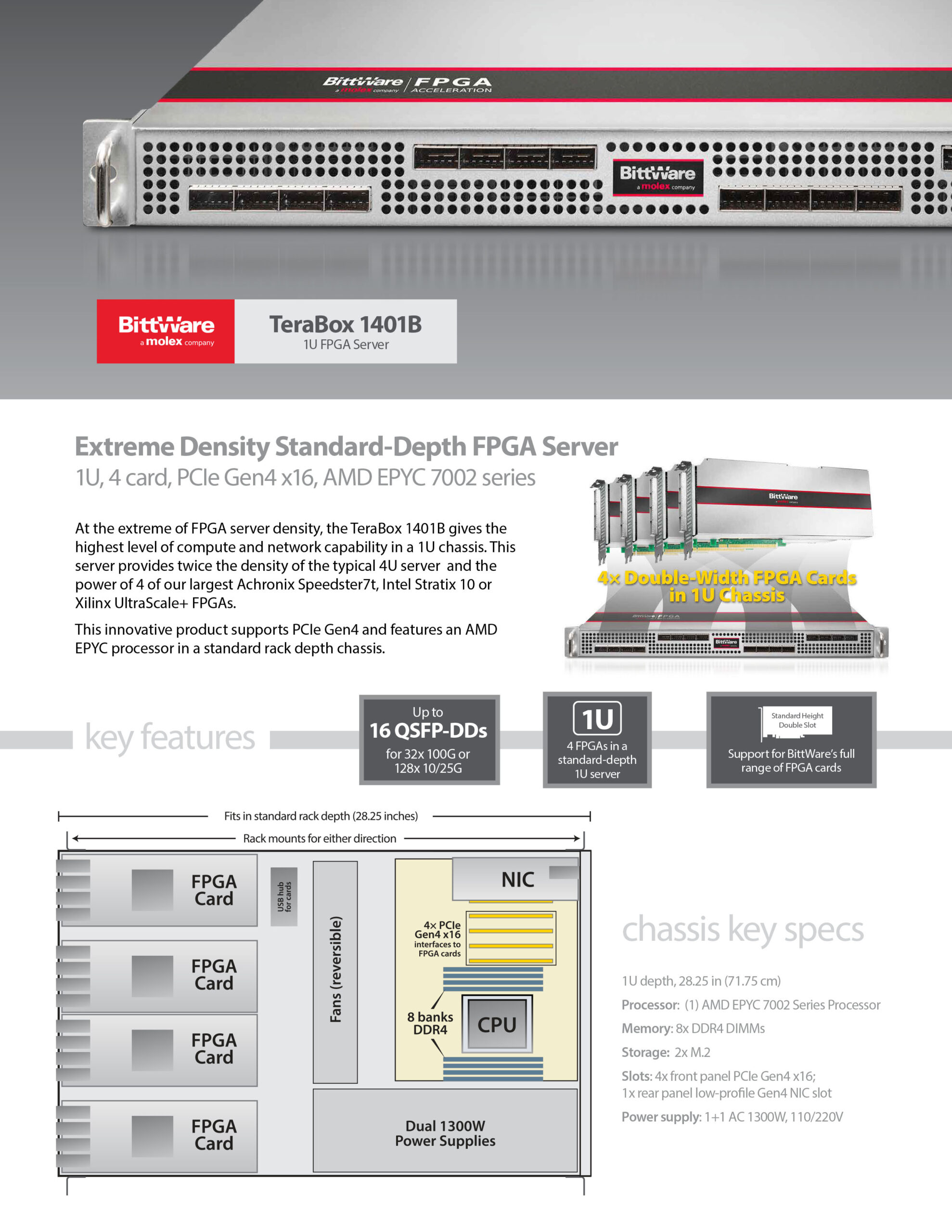 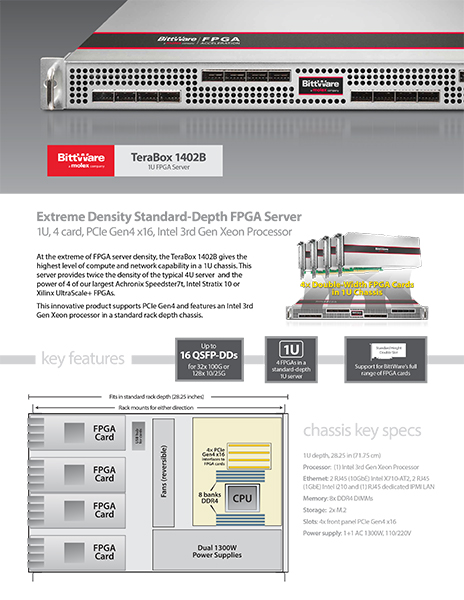 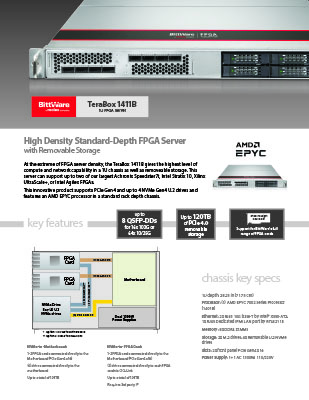 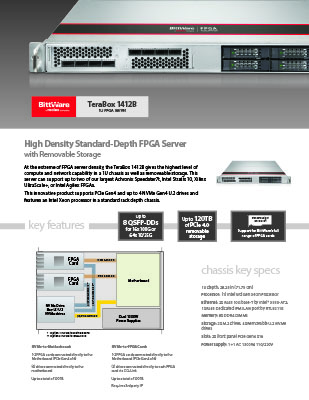 The TeraBox 1401B and 1402B support many of BittWare’s Achronix, Intel and Xilinx FPGA-based PCIe cards. The table below lists system totals when populated with four cards*:

Our technical sales team is ready to provide availability and configuration information, or answer your technical questions.